Mark continues his attempt to make sense of the world for his grandson – and for himself. Theo was five months old at the time.

They say that it’s better to travel hopefully than to arrive. And I have spent many years nodding in agreement with that sentiment while secretly checking my watch and thinking: ‘Absolutely. As long as we do arrive. And quickly.’

I have always lacked patience. People are meant to become more impatient the older they get. I started out that way.

That’s not to say that I don’t relish long and difficult tasks. In fact, it’s the opposite: the more complex the better. I can sit through three-hour films or plays with total absorption; watch cricket all day; lose myself in labyrinthine novels; spend hours solving arcane puzzles.

It’s not that I lack patience with things – I don’t throw up my hands and walk quickly, irritably away when things get in my way, go wrong, don’t work, conspire against me.

Nor do I generally lack patience with people – unless, of course, they dither, prevaricate, obfuscate.

No, my impatience takes another form: I just want to live life at the speed of my choosing. And the problem is that I’ve always seemed to want to travel faster than most.

I think it’s a control thing. I resent having to adjust my pace.

So I don’t do queues, unless there is absolutely no alternative – and when I do I seethe, tut, sigh. I rail against traffic jams and drivers who have the temerity to want to go exactly where I’m going, only more slowly. I huff and puff at trains that run late, planes that miss their take-off slots, people who dawdle in the street. Or just stop dead. In front of me. I despair at crowds that shuffle along pavements; I curse the flocks of tourists that block my way as they follow after their umbrella-carrying guides. And if I’ve got an appointment – dentists are the worst – I fulminate at being kept waiting: I’m here on time and ready. Why on earth can’t you be?

It’s a fact, I’ve always been in something of a hurry, pushing myself hard. And that’s why, perhaps, I love places that are in a hurry too, where you can feel the energy pulsing: London, New York, Hong Kong, Beijing, Delhi. Much as I like the countryside, I couldn’t live there; I have to be in a city. Despite the crowds.

Back in the 1950s, two cardiologists (Meyer Friedman and Ray Rosenman) split the population of the world into two types. If you are Type A, you are impatient, want other people to get to the point; you are anxious, proactive, and concerned with time management. If you are Type B you live at a lower stress level, work steadily – enjoy achievement but don’t become stressed when you don’t achieve. Type B personalities can be creative and enjoy exploring ideas and concepts; they are often reflective.

There’s an old illustration that makes the point. 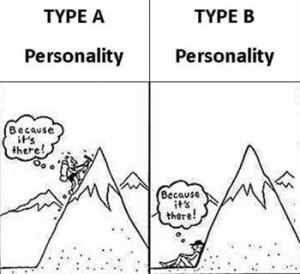 Incidentally, psychologists in the 1950s quickly adopted Friedman and Rosenman’s hypothesis and subsequently added a Type C. This personality type apparently tends to suppress emotions, particularly negative ones such as anger.  They are pathologically nice, avoid conflict are over-compliant and over-patient.

You will have spotted the obvious flaw in all this already: there’s something of each type in all of us. It’s not as simple as ABC: we don’t fit neatly.

Take me: a polite and generous description would be that I’m impatient, proactive, creative (at least, as an author, I hope I am), reflective, idea-exploring, with classically British emotion-suppressing tendencies. Pick the bones out of that, Meyer and Ray!

But I digress. And as an impatient man, that surely won’t do.

So a confession next: I admit that living on the brink of impatience is not always for the best. It can be wearing. For me and even more so for those around me.

And yet, I make no real apology for it.

You see, I have never believed that patience is the virtue that people say it is. Because I don’t believe the world is moved forwards by patient men and women. I think it’s changed by people in a hurry; who are impatient with the status quo and believe the world can be improved.

And that’s why Bill Gates description of himself as an ‘impatient optimist’ is so compelling. It’s a powerful and heady cocktail: impatience and optimism. He’s impatient with lack of progress, optimistic that polio can be eradicated.

By the way, something else that is often quoted by Type B apologists is that ‘the race is not given to the swift but to those who endure’.

Not true. The race surely goes to those who are both swift and capable of endurance. What we need is people who move fast, stick around, see things through.

But that said, being in a constant state of hurry isn’t an answer either.

It took me too many years to realise that so much of the world is best seen on foot. Or on a bicycle. That gardens are not to be rushed, they have their own time and season. That it’s better to study one picture than to hungrily try to absorb everything in a gallery.

I’ve been fortunate in my life: I’ve been to amazing places, seen extraordinary sights. But I wish now that I had lingered longer. A little longer at least.

Which brings me finally to a small boy in a hurry, who was so anxious to get on and get going that he entered the world six weeks early. And seems to have been in a hurry ever since. You know who I’m talking about, Theo.

Emmeline Pankhurst once said: ‘One baby is a patient baby, and waits indefinitely until its mother is ready to feed it. The other baby is an impatient baby and cries lustily, screams and kicks and makes everybody unpleasant until it is fed. Well, we know perfectly well which baby is attended to first.’

She was, of course, making a point about politics and why the suffragettes needed to kick and scream. But it was a neat observation too about those Type As and Bs.

She was right, to get on in the world, you do need to be impatient; perhaps even to kick and scream a little.

But trust me, you need to take time too. To watch a garden grow.

If you’ve enjoyed what you’ve read, a ‘Like’ would be great! Thank you.