Mark  Haysom, is the author of ‘Love, Love Me Do’ and ‘Imagine’. In his monthly Blog, he attempts to make sense of the world for his grandson – and for himself. Theo is  now thirteen months old. 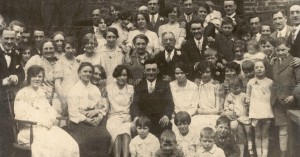 There’s this photograph – and, in truth, it doesn’t have much going for it.

It’s battered and worn, with an ugly crease that runs haphazardly through it; it’s black and white and not quite in focus; it’s poorly composed, with some faces smudged and others obscured; it was taken in a gloomy anonymous backstreet against a grimy brick wall; and I don’t have a clue who most of the people are.

And yet it’s one of my greatest treasures.

But it’s much more than a rare relic of the family past: it’s value to me is immeasurably greater than that.

It’s precious because my grandparents kept it for the sixty years of their life together. And every now and then they will have retrieved it from the sideboard drawer; they will have touched it; held it, remembering together.

Remembering that day; remembering all their years.

And when they did, they will have pointed out different family members – what they were wearing, how they did their hair; who said what to whom and why; the jokes they told, the speeches they made; who had too much to drink and had to go home to sleep it off; who disapproved; who danced and who didn’t.

They will have laughed together over this photograph. Sighed over it too, at the years as they passed.

For their diamond wedding anniversary, I had it copied and framed for them – to hang on their council-flat wall, next to the telegram from the Queen. I think I was almost more proud than they were.

But there’s more to this photograph even than that.

Because at the very centre of it, standing proud, if not tall – a carnation in his button-hole, a loving hand on his son’s shoulder – is the father of the groom: my great granddad.

And that’s special because I can just about remember him, from when I was four and he was eighty-five. In the fog of my memory, he was diminutive, white-haired and still defiantly puffing at his pipe.

For me then, this is the most treasured of photographs – because my grandparents will have held it so often; because it connects me to them; because of my great granddad; and because my memories of all of them carry me back to another time, to my own long ago childhood.

So, there’s powerful magic here in this tattered and creased, black and white snapshot from the past.

That magic is not unique to me, of course.

Most families will have grainy prints like this from the distant or more recent past – handed down through generations.

There will be smiling records of birthdays, weddings, anniversaries; of barely-remembered bucket-and-spade holidays, children building castles in the sand; of friends and family groups, posing self-consciously, captured in a moment, frozen in time with that hairdo, wearing that suit that never really fitted, that tie forever undone, that dress that never really suited.

And all of them will conjure up memories, bring smiles and laughter. And, perhaps, sometimes a few tears.

In the more meticulous of families these photographs will be mounted in albums; arranged chronologically, painstakingly captioned. In others, they’ll be in a chaotic jumble in a shoebox on the top of a wardrobe or in a battered suitcase in a dark and dusty corner of the attic.

Wherever they are kept, though, one thing is likely – there won’t be many of them. Perhaps only handfuls, maybe a few hundred.

And that’s not surprising because, until very recently, the whole business of photography was always so expensive, uncertain and difficult.

It was quite a performance: there used to be a whole ritual to work through for any holiday or family wedding.

First you had to dig out the rarely used camera and confirm the inevitable. That it had no film.

That meant a trip to the camera shop or chemist to purchase a precious spool – never being entirely confident you had bought the right thing.

At home, came the tricky part. The back of the camera had to be prised open, the film had to be loaded; nervously, carefully; avoiding the light, winding it on until the first number clicked into view.

Finally loaded, the camera would be used only sparingly: you only had 24 or 36 shots and they were not to be wasted. And that meant that one thing was guaranteed – there would be people in every frame, usually standing unnaturally still, awkwardly posed.

Film was too expensive, too uncertain to waste on anything but people. If you wanted a picture of a view or a building, you put someone in front of it. Or you bought a postcard.

Once the holiday was over or the wedding done, the film was liberated from the back of the camera and carried eagerly back to the chemist in its small plastic tub.

Days then passed while you waited for it to be developed. Finally you collected your fat envelope of prints and began excitedly going through them.

And amongst those that were over-exposed, under-exposed, out-of-focus, blurred or shadowy, there would be some good ones.

These would then be passed around the table, from person to person, from hand to hand. And there would be oohs and aahs and laughter and a sharing of the memories.

And then came digital and within remarkably few years everything has changed.

Suddenly it’s a world without limits.

Now we all have cameras with us all the time; we don’t have to worry about the vagaries of film. The cameras in our phones are infinitely better than anything we could have dreamed of; the results instant and more certain. If we don’t like a picture we can delete it, try again.

There’s virtually no restriction to the number of pictures we can now take. As a consequence, we no longer have to worry about using them sparingly. We can take images of anything and everything.

We can be spontaneous; extravagant. Capturing that moment. That expression. That flower. That sunset. That view.

And once captured, we can share these images instantly and in so many different ways – through social media, messaging, email.

There’s no denying it: it’s all so much is better in so many ways. The world is richer for it.

And yet, I can’t help but feel that something has been lost.

Because the images we take now have no physical reality. They are virtual; rarely printed; often quickly discarded. They are not passed as they once were from hand to hand.

And although their quality is so much better than it used to be, I’m not sure we look at them in quite the way we did. We don’t linger on them, return to them so often.

Because there are simply so many of them. It defeats us. And more isn’t always better.

Madrid is not a particularly photogenic city. It has, of course, its share of palaces, proud public buildings, welcoming parks – but it’s not Paris, London, Venice. There are not that many sights that draw visitor’s lens.

And yet, in the course of a long weekend there a few months ago, I took many more photographs than my grandparents will have owned in their long lifetimes.

And that’s a kind of madness, isn’t it? The balance has shifted too far, perhaps.

And I wonder what we will do with all of these images?

And I wonder too, Theo, what will become of all the photographs and videos taken of a small boy in his first year. And how many more there will be by the time you are ten or twenty?

And how will we extract from those unmanageable thousands just a few images. To have. To hold. To smile and laugh over. To remember.

If you’ve enjoyed what you’ve read, a ‘Like’ would be great. Thank you!

One Response to 16. There’s magic in this tattered snapshot from the past